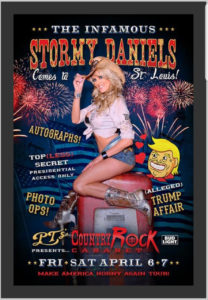 Daniels has made national headlines when it was revealed that she was paid $130,000 in hush money from Trump’s personal lawyer Michael Cohen back in October of 2016, to deny an alleged affair she had with the reality show star in 2006 at a celebrity golf tournament in Lake Tahoe.

On Sunday, in a 60 Minutes interview with Anderson Cooper, Cooper asks Daniels if she believes there’s financial upsides for her speaking about the alleged affair, such as writing a book or a dancing tour.

“That’s a lot of ifs. I could also get shunned,” Daniels said in the interview. “I mean, I could automatically be alienating half of my fanbase right at this very moment.”