COLUMBIA, Mo. – Columbia City Councilman Michael Trapp spoke at the Better Way Missouri PAC meeting about his desire to add marijuana reform to the city’s lobbying agenda. In doing so, he feels that cannabis will act as a “harm reduction substitute” and a deterrent from Columbians’ addiction to opioid painkillers. He was also joined by Vandalia Police Chief Chris Hammann at the meeting. 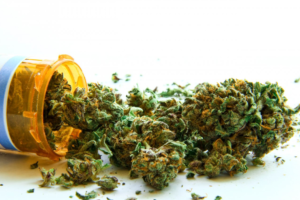 Before Trapp was on the City Council, he worked as a drug policy reform activist, substance abuse counselor, and worked for a medical marijuana research facility under Dr. Tod Mikuriya, who Trapp considers, “the worlds foremost expert on medical marijuana.” In Trapp’s experience, he’s seen marijuana act “an easement” while also mentioning its capabilities for medicinal therapy.

“It has psychotherapeutic effects, beneficial for people with mental health conditions, it’s an antispasmodic – probably it’s most useful function, [it helps] with muscle paralysis, cerebral palsy, muscular dystrophy; it’s a bronchodilator… cannabis smoking doesn’t increase cancer rates because it has some counter effects that counter that,” he said.

Specifically, what has him driven to fight marijuana prohibition is its analgesic or painkilling effects. Trapp talks about it can be a safer alternative as it is not as addictive as certain prescription drugs and opioid painkillers. He points to the large amounts of deaths that have been caused by addiction to prescribed painkillers, which also cause people to find cheaper alternatives in heroin. Trapp laments that marijuana can become a problem in some people’s lives, but thinks that harsh punishments for drugs do little to stop drug addiction. “Putting people in prison or in jail is not an answer to a social problem,” he said.

He points to the notable decrease in opioid related deaths in states that allow doctors to prescribe medical marijuana or other cannabis related treatments. In those states, opioid overdoses are lower by a third in comparison to states with marijuana prohibitions. “It’s powerful and it’s probably the most powerful thing we can do to curb opioid [addictions,]” Trapp explained.

Before the legislature resumes session in January, he plans on bringing his proposal to add marijuana reform to the lobbying agenda. Currently, Missouri only permits the use of low-level Cannabidiol, a compound found in cannabis. Trapp plans on amending Columbia’s punishment for marijuana possession and use to a low level offense, without jail time.

This article first appeared in the Missouri Times.