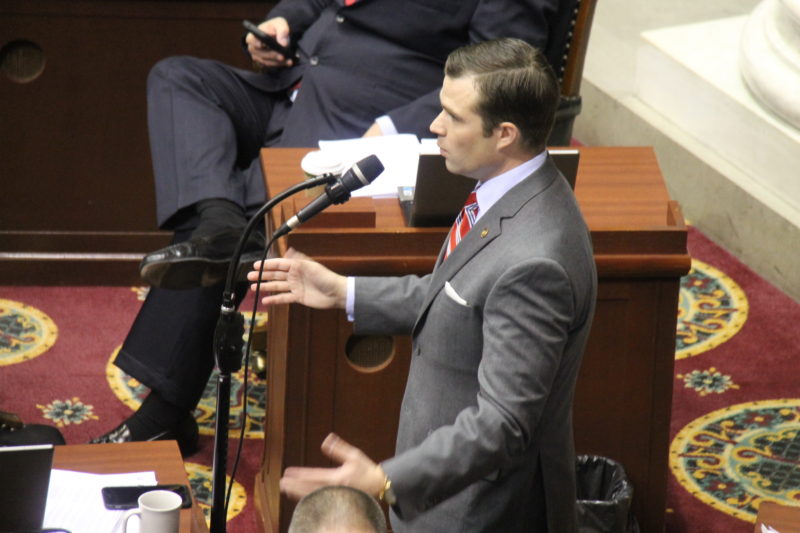 JEFFERSON CITY, Mo. – Republican state representative Paul Curtman has been eyeing the 2018 race for U.S. Senate in Missouri, and has now launched an exploratory committee.

Curtman, a longtime constitutional conservative from Pacific, announced the move on Thursday morning, saying that he is beginning the exploration for the federal office because the state and nation “cannot afford six more years of Senator McCaskill.”

“I have a vision for America, and it involves Sen. Claire McCaskill becoming a private citizen,” he said.

He says that the politicians serving in Washington D.C. have failed the American people by attacking jobs, families and values, while also creating massive budget deficits that the American citizens can’t afford.

“I’m tired of political insiders and bureaucrats that have done nothing but grow the size of government and create budget deficits that will take generations to pay off. We need less of them and more of us,” Curtman said. “We need leaders who will stand and fight for personal freedoms, sound financial principles, and our constitution.”

Curtman is currently serving in the Missouri House of Representatives, where he is chairman of the Ways and Means Committee, but he is term-limited at the end of 2018. He served in the military from 1999 to 2003, and is a financial advisor with a bachelor’s degree from the University of Missouri-St. Louis, where he majored in political science. He’s also a published author, having written a book titled “Don’t Tread on Me: The Constitution and State Sovereignty.”

If Curtman does enter the race, he would join two other existing candidates, Tony Monetti and Austin Petersen, as the potential challenger of the incumbent Senator Claire McCaskill. He says that the exploratory committee will help him decide if there’s enough support and resources to challenge the Democrat, but he also says it’s not the first time he has faced off against McCaskill.

He caught the eye of several conservatives when he challenged McCaskill on the constitutionality of the Affordable Care Act years ago, and hopes to bring that same kind of fire to the race in 2018.

Still, others have been named as possible candidates, including Missouri Attorney General Josh Hawley, whom this week Vice President Mike Pence called on to run for the seat. State Treasurer Eric Schmitt, Congressman Blaine Leutkemeyer, and Congresswoman Vicky Hartzler have also been suggested as potential candidates.

He says that if he were elected to the U.S. Senate, he would seek to bring change by changing the way money is spent and focusing on good fiscal responsibility, as well as working toward a full repeal of Obamacare.

According to Curtman’s new campaign website, he will hold a kickoff event at Orlando’s Events Centers in Maryland Heights on Saturday, July 29.