Ethical Society of Police ask for voices to be represented 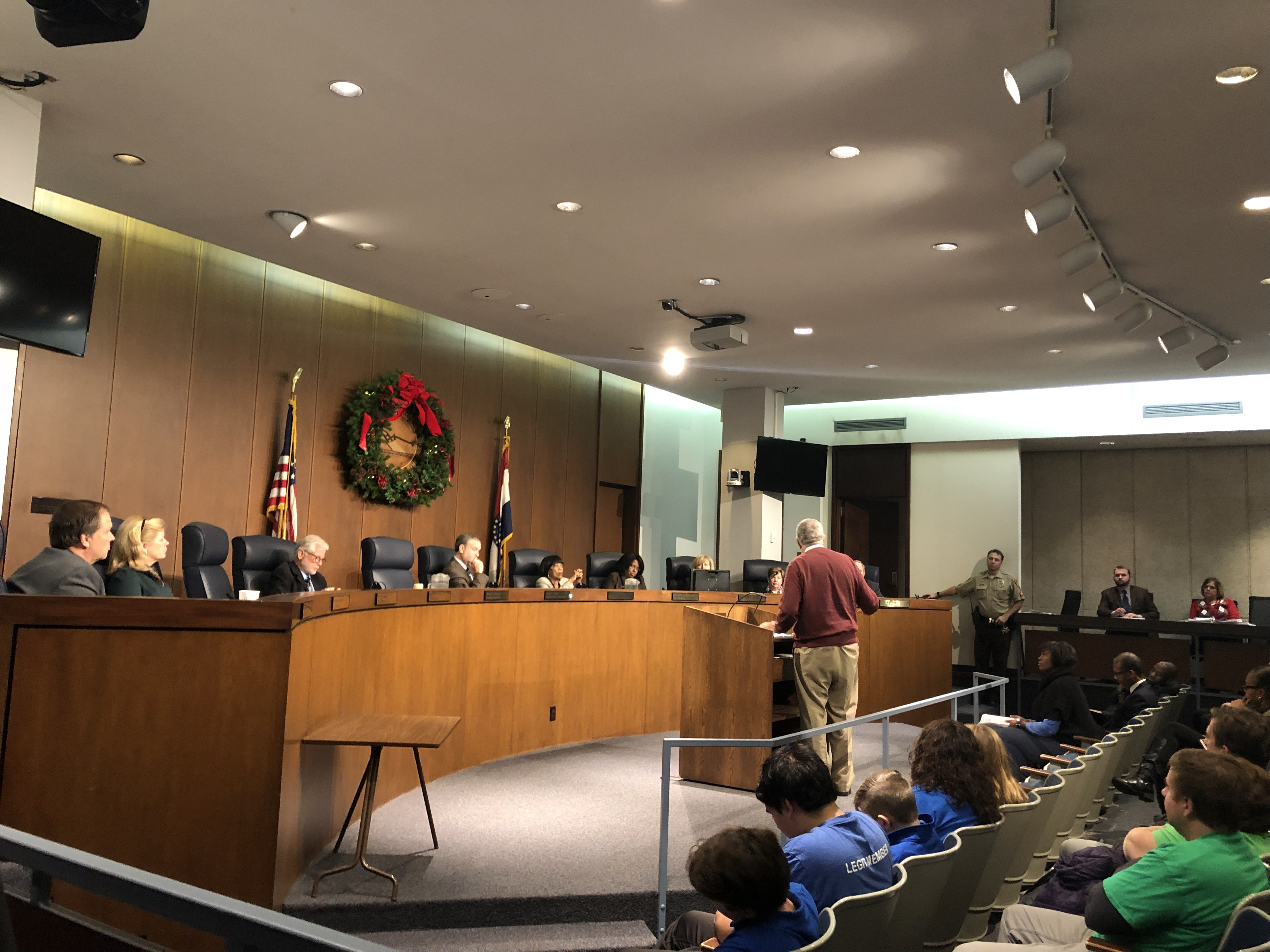 CLAYTON, Mo. – The Ethical Society of Police (ESOP), an organization founded in 1972, that aims to connect with the community and ensure the rights of their members, went before the council to request that officers serving with the St. Louis County Police Department receive adequate representation.

Many residents, as well as ESOP representatives, addressed the St. Louis County Council members at Tuesday evening’s meeting to express their concerns and request that something needs be done.

Rev. Phillip Duvall said that the county is in a public safety crisis and needs to review the legal matter of the MOU. He also shared the story of Officer Nikki Brown, who resigned due to racial tensions of being the only African American female.

Duvall said that Brown was denied training opportunities as well as passed over for job promotions. He said that after Brown complained to her supervisors, she was subjected to isolation within her immediate working area.

“Police Commissioners are not independent, so it’s not really a review board,” Duvall said. “It’s a rubber stamp of the status quo…I’m offended and I’ve told this to the Police Commission. Anytime a high-ranking St. Louis County Police Officer says ‘What are you all complaining for? We have a black Deputy Chief and we have two of the most powerful men, the black Chairman and the black Vice-Chairman.’ That’s offensive. To think that that comes out of the mouths of high-ranking white police officers.”

Currently, there are 60 officers of different races and ethnicities in the St. Louis County Police Department that are also members of the Ethical Society of Police.

According to ESOP, many officers in St. Louis County do not feel as if they are fully being represented and ESOP is requesting an opportunity to have a voice and give representation to everyone in the department.

In response to ESOP’s request, St. Louis County Police Chief Jon Belmar wrote a letter explaining that he and the St. Louis County Board of Commissioners carefully reviewed the Memorandum of Understanding (MOU) which was provided by ESOP Attorney, Nolan Sharkey.

“Due to this fact,” Belmar wrote, “The St. Louis County Police Department is unable to enter into the proposed MOU.”

Rev. Darryl Gray, Community Liaison for Ethical Society of Police, told the council members that Chief Belmar used the excuse of not agreeing to the MOU by saying that ESOP wants to be the sole bargaining agent for the police department.

Heather Taylor, President of Ethical Society of Police, said that ESOP did not request to be the sole bargaining agent at all and does not want to be, but rather, would like to represent all of St. Louis County’s Police Officers.

“I think the letter that Chief Belmar presented mischaracterized what we are trying to do,” Taylor said. “We are trying to include inclusion. That means that officers who are lesbian, black, white, latino, white male, white female, everyone has a voice. And that’s what missing with the St. Louis County Police Department…We are here to have a voice inside the police department.”

Taylor said that ESOP wants to represent the people in the community and the officers in the department who have been marginalized.

“The St. Louis County Police Department has made great strides over the past several years in our commitment to recruit and hire the very best applicants, and certainly minority candidates are an important part of that effort,” Belmar wrote. “We have realized a greater representation of minority officers joining our command staff, our ranks of Lieutenants and Sergeants and our specialized units. Such initiatives are altogether appropriate, and I, along with the Board of Police Commissioners are proud of these accomplishments.”

Belmar wrote that the implementation of the Cadet and PAL programs have provided the St. Louis County Police Department with opportunities to recruit future members of the department, while also making a positive impact on the community. He also wrote that the support that the Ethical Society of Police provided in recruiting and community engagement has made a positive impact as well.

“I along with the Police Board welcome the opportunity to continue this relationship as we work together as members of this Department,” Belmar wrote. “This Department will remain committed to ensuring that we provide the very best service and protection to those we are sworn to serve.”

Many speakers touched on the racial tension and disparities in the county and how the relationship with ESOP and St. Louis County would be an opportunity for the county to move the region forward and to make the county an invested place to work, live and play.

“We want to talk about trust and legitimacy,” Duvall said. “We are asking this body to freeze, when talking about the budget, because it’s about money, freeze the budget. Ask these tough questions about what’s going on with the Ethical Society MOU, freeze the budget talks about adding those additional funds until they explain to this community what they’re doing, what they’re not doing.”

Jane Dueker, representing the St. Louis County Police Officers Association, addressed the concerns that the association has with the proposed MOU that Belmar is currently not inclined to sign.

“That is by the constitution,” Dueker said. “The employees decide, they are the ones who elect a representative.”

Dueker acknowledged that it had already been discussed that ESOP does not want to intrude on the constitutional rights of the association, but said that there are parts in the agreement that gives the association some concerns that that is what is happening.

“We would love to collaborate with ESOP,” Dueker said. “There aren’t regular meetings that go on with the association and ESOP, and that should probably change. I think there needs to be more collaboration and I think everyone wants that.”

Dueker said that as long as the agreement with ESOP does not infringe on the legal rights that have already been decided, then collaboration and an agreement could be made. She then went through the letter from ESOP and touched on the different parts of the letter that are giving the association legitimate concerns.

Councilwoman Erby proceeded to ask Dueker about the representation of Nikki Brown and how the association is representing the current officers in the police department.

“We can have zero tolerance of racism if you really want it,” Erby said.

Councilwoman Walton-Gray made a not that the council will have a hearing about the matters of the MOU agreement between ESOP and the St. Louis County Police Department as well as discussing the discrimination that Officer Nikki Brown experienced.

Next week’s meeting will be held on Tuesday, Nov. 20th at 1:00 pm in the County Council Chambers.