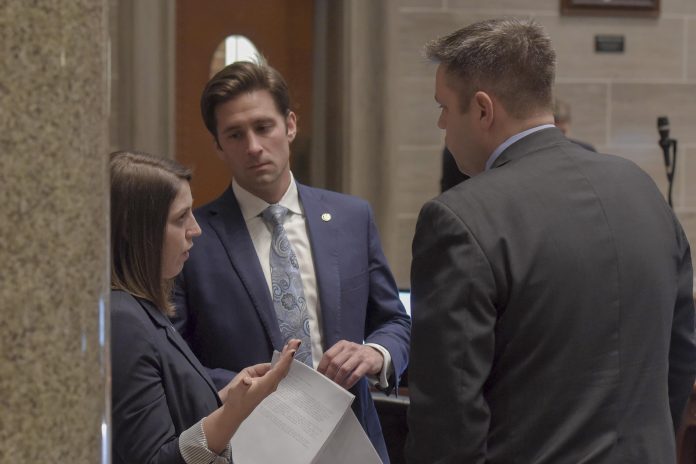 JEFFERSON CITY, Mo. – Rep. David Gregory has been a man with a mission since being elected to office, and it seems that the hard work is paying off.

While testifying before the House Budget Committee on Tuesday, the Republican state representative presented some of the results of an audit he has been working on for several months.

“Missouri families have to carefully watch their budgets and identify areas for savings. They expect their state government to do the same,” Gregory said.  “The Fiscal Opportunity Audit of the Department of Revenue discovered tens of millions in potential cost savings for taxpayers.”

In his review, he located the potential for tens of millions in savings for Missouri taxpayers, adding up to $36 million in cost-saving options.

Gregory’s “Fiscal Opportunity Audit” reviewed the Missouri Department of Revenue, their data collection, and policies, with the representative from District 96 looking to utilize his skills and experience in auditing and locating up to $36 million in cost-saving options.

His experience comes from his work for a global consulting firm, where he was responsible for analyzing financial statements, internal controls, and business processes, where his audits helped located significant savings for various multinational corporations.

In his review of the Department of Revenue, Gregory said he found 17 areas where the state could save money. He outlined some of those areas while speaking before the committee, where his work, and the potential for more audits and reviews, were warmly received by his fellow budget committee members.

Some of the cost-saving areas he highlighted were:

If $36 million could be found in one department, Gregory notes, and similar numbers could be found within others, then it could very easily mean hundreds of millions of dollars that could be re-purposed for other items, like social service programs or education.

Gregory says he intends to continue digging into the other departments in a similar manner, but wanted to make sure he had the support of his colleagues in the endeavor.

Later this year, the House Budget Committee will make fiscal recommendations for the General Assembly to consider. Gregory is working with the committee to implement elements of his Fiscal Opportunity Audit in their current work but says that some portions of it will be initiatives that departments will have to take on themselves to address, as well.

“This, to me, is why I came down here,” Gregory said. “The findings in this audit are exactly why I get so frustrated when politicians think we need to raise taxes to help more people. Wrong. We can help more people and spend less money doing it.”

4,239 thoughts on “Gregory’s audit of Department of Revenue highlights $36 million in cost-savings”