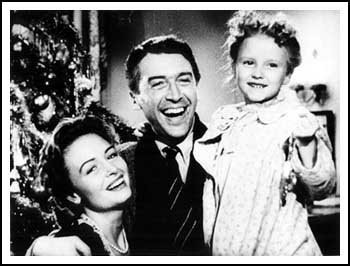 The holiday season is in full swing and fans of the 1946 classic Christmas movie, It’s a Wonderful Life, can still find Zuzu Bailey hearing angels getting their wings. Karolyn Grimes, the actress who played young Zuzu, said she never knew anything different from acting.

“I started acting when I was four years old and it’s just what I did,” Grimes said. “I got to go see stars on set and it just wasn’t a big deal, it was an everyday thing for me.”

Grime played Zuzu Bailey when she was just six years old. While she didn’t see it as anything but another job, It’s a Wonderful Life was her fourth movie.

“I loved the movie set with the big Christmas tree and the snow,” Grimes said.

Typically, Grimes was the only child on set for movies, but she remembered how fun the set of It’s a Wonderful Life was because there were other kids to play with. Yet, her fondest memory was being in Jimmy Stewart’s arms and the effort of kindness that he shared with her.

Grimes did not get to stay in Hollywood her whole life. She became an orphan at the age of 15 and never continued with acting after that. Her mother died when she was 12 and her father was killed in a car accident three years later. Grimes was sent as an only child to move to Missouri with her aunt and uncle.

Grimes said moving to Osceola, Mo. was a big culture change for her at 15. She went from attending school with 900 classmates to 36 in her graduating class. She said she hated it at first, but over the course of her first year there she ended up loving it.

“Everyone knew that I was having a rough transition and gave me lots of love,” Grimes said. “I learned that there were really great people in the world and I didn’t want to go back to Hollywood.”

Grimes shared that she regretted leaving her home and friends, but moving to Osceola she was able to learn how genuine people were. After getting settled into her new life, she didn’t think about getting back into the acting field. The only thing she wishes she had done was taken advantage of the scholarships she received to attend Ivy schools in the east.

Today, Grimes does a lot of traveling during the holidays to promote the classic Christmas movie she got to be part of as a young girl. While everyone else in America is gathering together with their families to watch the movie, she’s introducing the movie and sharing its message. Every so often she gets the chance to watch the movie with the new people she meets.

Whether she is meeting other celebrities or movie fans of all ages at hospitals and nursing homes, Grimes said she feels privileged to be part of the message and the movie itself.

“Everyone I meet shares their stories about how the movie changed their lives in some ways, it’s very uplifting,” Grimes said. “It’s a Wonderful Life brings families together. I’m glad that [they] found the magic.”