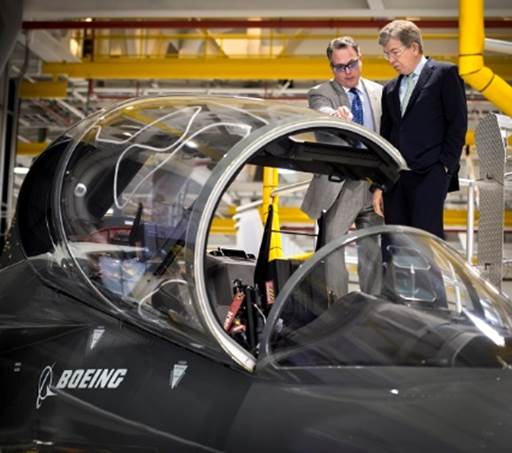 ST. LOUIS — U.S. Senator Roy Blunt (Mo.) visited Boeing St. Louis on Friday to view and receive an update on the U.S. Air Force T-X trainer, which was designed in St. Louis. The contract for the aircraft is expected to be awarded this year, which could bring more good-paying jobs to the St. Louis region.

“The St. Louis region’s deeply-rooted aviation history and highly-skilled workforce make it an ideal production site for Boeing’s T-X aircraft,” said Blunt. “This aircraft is another great example of Boeing’s innovative approach, which will help strengthen our nation’s defense and keep Americans safe. I’ll keep working to help the region and our state remain a national leader in advanced manufacturing.”

The T-X is a two-seat trainer aircraft that would replace the decades-old T-38 trainer currently in use by the U.S. Air Force. Boeing recently announced it would build the T-X in the St. Louis region if it is awarded the contract.

The aerospace and defense industries employ 80,000 Missourians. As a member of the Senate Appropriations Subcommittee on Defense, Blunt helped secure funding in the FY2017 omnibus appropriations bill for 14 Boeing Super Hornets, which are manufactured in St. Louis.