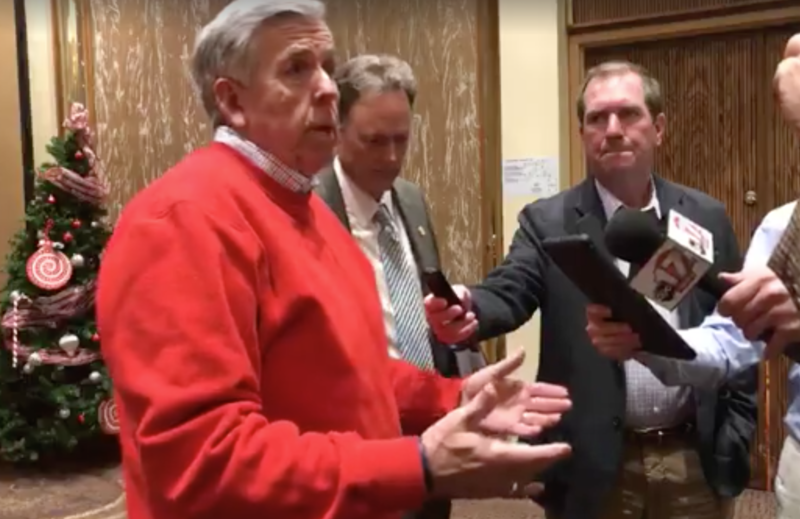 On Christmas Eve last year, I had undergone a five-way bypass surgery. Less than two weeks later on Monday, January 9, 2017, I took the oath of office as the 47th Lieutenant Governor. I was reminded, on my first day of office, of the many challenges Missouri faced in the upcoming months and years. A commitment was made to represent the young and the old, Republicans and the Democrats, from all walks of life. One of my goals as the 47th person to hold this office in Missouri is to transform the office into a national presence and to be active on a much wider variety of issues than in the past.

Early months of my first year as Lieutenant Governor, I presided over the Senate everyday of Session. I quickly learned the job and worked with Senators on both sides of the aisle. I even had to cast the first tie breaking vote in the first 60 days of session.

My staff and I committed to visiting and attending over 200 events statewide and successfully conquered that goal. It was important to me to take the time to visit these communities to tell the people thanks and to keep them informed on the issues facing Missouri. As my staff and I reflect through 2017, it has been a busy and successful year. The following highlights just a few milestones from 2017:

This year we launched a new statewide program called “Buy Missouri.” The program recognizes and promotes products made within the borders of Missouri while strengthening the state’s economy and bringing awareness to the buyer. “Buy Missouri” makes us aware of the importance of supporting our friends and neighbors.

Our state has hundreds of quality products made by Missourians, and it deserves the recognition that “Buy Missouri” will bring to them. This project is unique and has never been done on this scale in our state’s history, and we believe by promoting Missouri products ranging from barbecue sauce to windows to pet food, our economy will be strengthened. This is a win-win for Missouri manufacturers and consumers alike.

As a veteran of the United States Army, former Sheriff of Polk County and an advocate for 480,000 veterans who call Missouri home, we were proud to recognize all those who wear the uniform to keep our state and country safe. I was honored to see all of our state’s veterans, law enforcement and emergency personnel at the State Capitol on November 4 to say thank you for their service.

After many allegations regarding mistreatment of veterans at the St. Louis Veterans Home, the Lieutenant Governor’s Office initiated a full investigation. An ongoing investigation by the Lieutenant Governor’s Office over the past several months revealed allegations of mistreatment and inadequate care of residents of the Missouri Veterans Home in St. Louis. As a result, we called for an independent investigation which was granted. We learned the following:

During the past 10 months of investigating the allegations of mistreatment at the St. Louis Veterans Home, the following issues have come to our attention through statements from several families, current and former staff, and volunteers:

All of the above were verified by either medical professionals or multiple witnesses to specific incidents and are consistent with allegations that have been made in the past.

A result of this investigation, the administrator and assistant administrator were removed. Our hope is to always create an environment that is safe and adequate for our veterans.

As the official mission of my office is to advocate for our seniors, I am proud to continue to sponsor the Senior Service Award. The award, enacted in 2005, promotes and highlights the positive accomplishments Missouri’s senior citizens provide to their local communities. This year, 61 winners were chosen from 152 applications, representing 55 counties across Missouri. Our goal for 2018 is to have representation from all Missouri counties.

It’s a wonderful sight to see so many seniors across our state being recognized for their volunteerism. This year, we had a record number of winners for this award, a sign of the growing trend of baby boomers living longer and continuing to be productive members to our society. The winners were recognized in a ceremony at the Missouri State Capitol.

This year, my office inaugurated the “Vacation Missouri Photo Contest,” promoting Missouri tourism and the many wonders of the state, both natural and manmade. This year, 118 entries were received from people across the United States who live and/or vacation in Missouri.

Our office was overwhelmed by the positive response to the photo contest. Missouri welcomes over 41 million visitors every year, and as an advocate for Missouri tourism, our office is committed to raising awareness for our state’s many destinations for tourism and vacations. Winning photographs are posted on the Office of Lieutenant Governor of Missouri’s Facebook page. Winners will be recognized at the Capitol on January 22.

Presentation of the 2017 Governor’s Cup to Stone Hill Winery

The Missouri Wines, 2017 Governor Cup was awarded to the Held family, owners of Stone Hill Winery in Hermann. Stone Hill received the prestigious award as a result of being voted 2017’s Best Wine in Missouri. The champion wine consisted of a Dry Red, 2015 Norton. Hundreds of Missouri wines are judged annually through blind taste tests by experts from across the country to crown the Governor’s Cup Champion. The Missouri Wine Industry consists of over 130 wineries contributing more than $1.7 billion to Missouri’s economy annually.

It was a privilege and honor to be present at such a special event in Hermann, MO. The Held family is such a great and deserving family to receive this award. When you consider what the Held family has done through Stone Hill Winery over the decades, they are truly pioneers in the Missouri Wine industry. Businesses like Stone Hill Winery are what makes Missouri so special and unique.

The Missouri State Fair is special to my family and me. The State Fair began in 1901and plays a critical role in promoting agriculture and showcasing the best of our great state. I have been a longtime advocate for the State Fair which draws over 350,000 visitors each year. During the 2017 Missouri State Fair, I had the privilege of participating in the opening ceremonies while my wife, Teresa, hosted the pie contest. With a record attendance, my wife and I were also honored to host the Governor’s wine reception.  This was the first time the Lieutenant Governor and spouse hosted this event.

My wife, Teresa, and I co-chaired the new Board of Directors for Jobs for America’s Graduates in Missouri (JAG-Missouri).

JAG is a state-based national organization currently offered in 32 states and the Virgin Islands, serving about 57,000 students in 1,200 communities. JAG is dedicated to preventing dropouts among young people who have potential, but who are, for a variety of reasons, at-risk for not graduating from high school. Over one million students have participated since 1981. There are currently 19 JAG schools in Missouri, serving 1,050 students. Approximately 30 schools are anticipated to be in JAG for 2017-18. The graduation rate for JAG-Missouri students in recent years has been 95% or above.

President Trump came to Missouri for a visit. I was fortunate enough to meet the President and accompany him in the motorcade in Springfield. President Trump was very practical and approachable, and it was a pleasure to have met him.

This year has been a blessing and one not to be forgotten. It’s been a busy but successful year both personally and professionally. I want to thank my staff for all the hard work, dedication and loyalty to the people of Missouri. I hope my love for my family and Missouri shines through in every action accomplished. I look forward to serving you again in 2018. I will do my utmost to justify your faith in me. May God bless each and every one of you and our great state of Missouri.