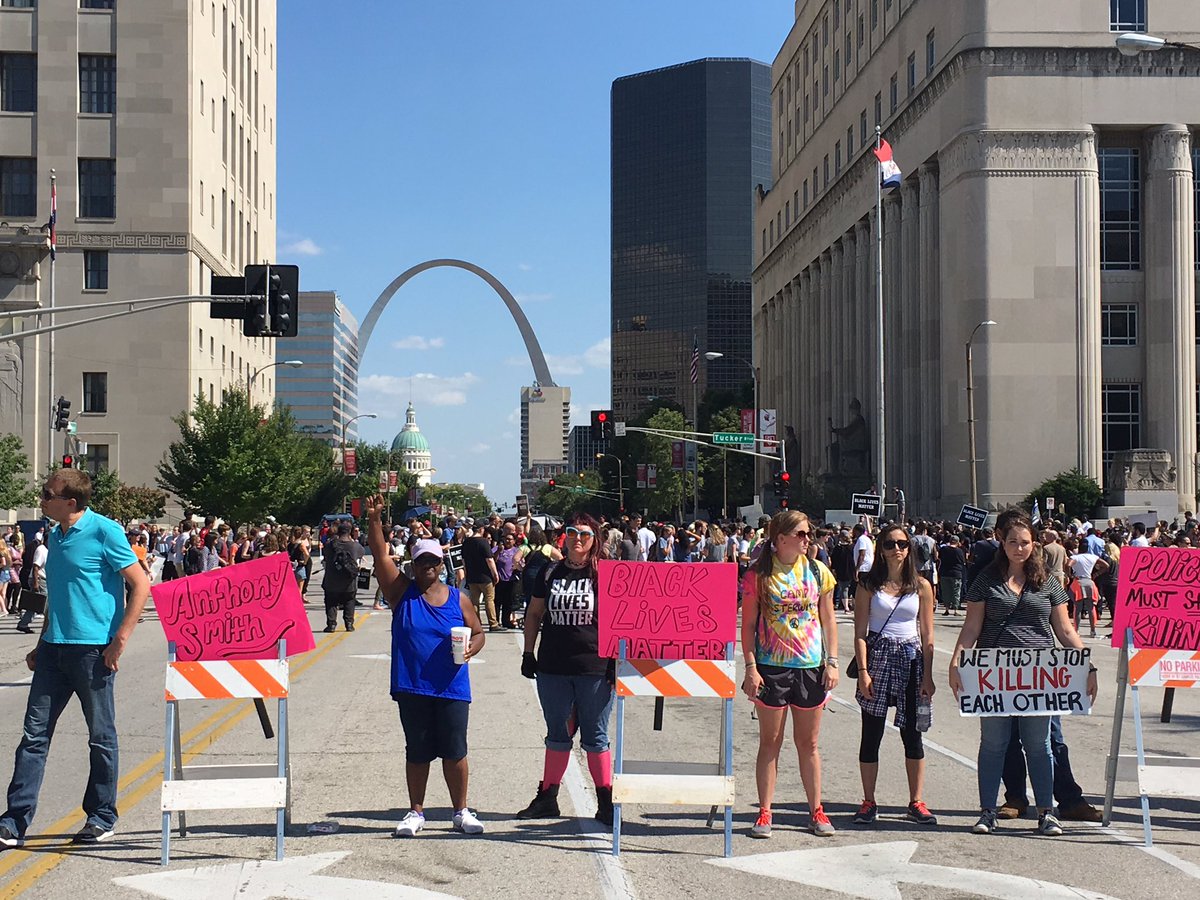 The streets of downtown St. Louis on Friday were full of protestors and St. Louis area police officers trying to keep the peace.

Tensions between the two were tested as multiple protestors were pepper sprayed when they tried to block police vehicles and officers on bicycles.

Some protestors were handing out food and bottled water to help keep other marchers hydrated but some in the crowd used the bottled water as projectiles against police armed with riot shields.

The energy filled protests were a result of Friday morning’s announcement that former St. Louis police officer Jason Stockley was found not guilty of first-degree murder or armed criminal action for the December 2011 shooting death of Anthony Lamar Smith.

Sarah Martin, a St. Louis alderman of the 11th Ward, said she was disappointed with the decision that Stockley was not convicted.

“It’s incredibly disappointing. It certainly doesn’t restore any faith in the justice system,” Martin said. “I don’t know all of the details but watching the video, it sends a message that you don’t have to follow protocol, you can have your own weapon. It can appear to be premeditated and be okay.”

Martin said while she didn’t agree with the verdict, the St. Louis police officers were doing a good job maintaining the peace after the announcement.

“It’s been incredibly peaceful. I think right now the message is that justice wasn’t served and that it’s okay to get out and protest in a peaceful manner and you don’t have to vandalize or be violent to get your message across out right now,” she said. “The streets are blocked off but it’s certainly not causing anyone any harm. Drivers can drive a couple blocks around.”

Protestors are now in the middle of Tucker, chants of BLM. #stockleyprotest #STL pic.twitter.com/Tbr6WCV6xt

Sen. Jamilah Nasheed, D-St. Louis, also argued the verdict and said it brought a dark cloud over the city of St. Louis.

“It took us five steps back when it comes to police and community relations, something that we’ve been trying to build upon since Ferguson,” Nasheed said. “It’s unfortunate, I think people have a right to outraged, I think people have the right to be angry because time and time again, justice does not prevail.”

Nasheed said she believed the police thus far have been doing a good job keeping the peace and hoped protestors and property remained safe within the city.

“St. Louis community, we are going to overcome and rise above what we’re seeing happening today but we have to begin look at how we’re going to rebuild police and community relations because right now it’s stagnant. This verdict has really taken us five-steps back.”