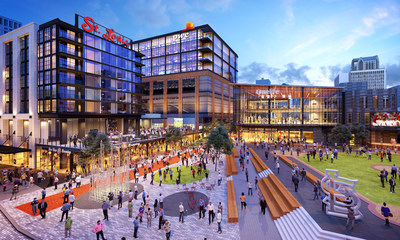 ST. LOUIS – A major construction milestone was celebrated on Wednesday with the $260 million expansion of Ballpark Village, a “dynamic” plan to bring a “vibrant” 24/7 neighborhood to downtown St. Louis.

The St. Louis Cardinals and The Cordish Companies celebrated with a traditional Topping Out Ceremony of the Class-A Office Tower, the PwC Pennant Building, making the completion of the exterior structure of the 11-story building.

“All winter long, we’ve watched this project rise from the ground,” Bill DeWitt III, president of the Cardinals, said. “Giving the Class-A Tower an official name, The PwC Pennant Building, and celebrating with a Topping Out Ceremony is a meaningful way to mark this construction milestone.”

Anchored by PwC, one of the largest and prestigious firms in the world and longtime employer in St. Louis, the building is expected to open Summer 2019 as the first new construction office built in downtown St. Louis in over a generation.

“It is extremely exciting…to join our partners, the Cardinals, in celebrating this major construction milestone for the expansion of Ballpark Village and recognize the hard work and skill of our construction partners, PARIC Corporation,” Nick Benjamin, vice president of development for The Cordish Companies, said. “Today’s Topping Out celebration continues the momentum of the second phase of Ballpark Village.”

The PwC Pennant Building, designed jointly by HKS Architects, Hord Coplan Macht (HCM), and Tao & Lee, is located on the corner of Walnut and 8th Street, will anchor the west end of Cardinal Way, a new street that will be revealed through the neighborhood from 8th Street to Broadway.

“Ballpark Village will offer an incredible location and great amenities for our team members in the heart of this exciting neighborhood,” John Tvrdik, managing partner of PwC-St. Louis Office, said.

Constructed by PARIC Corporation, the building will feature street-level retail, modern office amenities, and over 460 structured parking spots. The PwC Pennant Building will also have a private rooftop deck with views of Busch Stadium, downtown St. Louis, and the Gateway Arch.

In addition to the Topping Out Ceremony and giving the 11-story building its official name, the Cardinals and The Cordish Companies announced that ButcherJoseph & Co., a Clayton-based investment baking firm, will be moving their offices downtown to join PwC as a new tenant of the PwC Pennant Building.