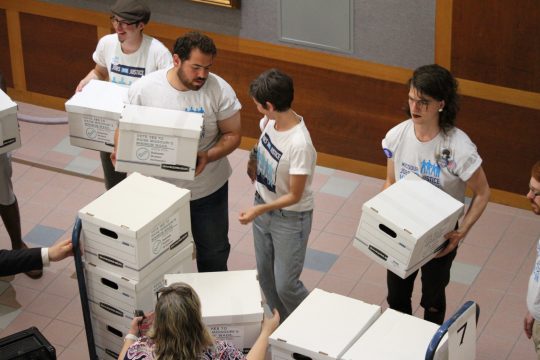 JEFFERSON CITY, Mo. — One initiative petition filed in Missouri for the 2020 general election wants women to be advised they have the right to a big shirt while another one is seeking to allow for electronic signatures during the signature gather process.

Both petitions filed with the Missouri Secretary of State’s Office are seeking state approval before they can begin circulation. To date, seven petitions have been filed with two being rejected, one withdrawn, and four are available for comments.

Petition 2020-007, filed by Carlton McRoberts, would add a fifth clause to the Miranda Rights read to females in police custody: “They have right to a big shirt.”

Both of the measures submitted by Gerald Peterson — Petition 2020-001 and Petition 2020-002 — less than one week after the 2018 General Election were rejected. One dealt with an annual franchise tax and the other would have expanded Medicaid in Missouri.

Before circulating petitions for signatures, state law requires that groups must first have the form of their petition approved by the Secretary of State’s Office. The office then has 23 days after the form of the petition is approved to draft ballot summary language.

Comments will be taken pursuant to Section 116.334, RSMo. This provision allows Missourians to offer their observations on the submitted proposal online, by mail or phone. Missourians can provide their comments online. The secretary of state’s office will review all comments submitted.