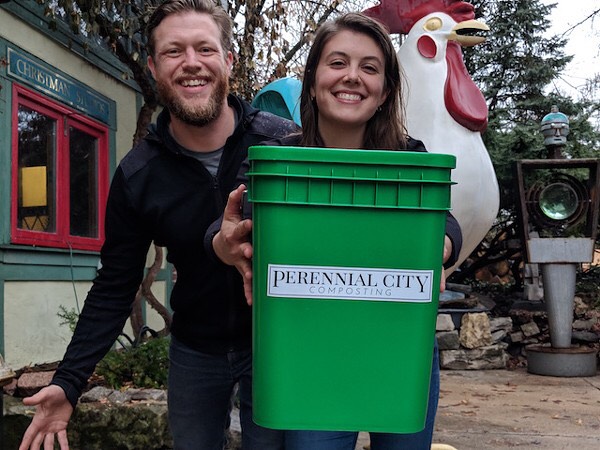 CLAYTON – Beth Grollmes-Kiefer and her husband, Tim, launched Perennial City in January of this year in their neighborhood, Skinker DeBaliviere. Nine months later, they have reached 50 neighborhoods, including Clayton, in the St. Louis area to provide compost services.

Grollmes-Kiefer said that she and her husband read an article in “Mother Earth News” about a business in Arizona that offered subscription-based composting. They began to envision how something like that would work in St. Louis and rang in the new year with the launch of Perennial City. They went door to door to hang up fliers and received sign ups for the service that same day.

“Urban farming is perfect for St. Louis because there is so much vacant land that needs some TLC,” said Grollmes-Kiefer.

They were able to acquire about 3 acres of vacant land in the city’s Visitation Park neighborhood through the city’s Land Reutilization Authority. They turned the land into an urban farm and use it to create compost from the compostable goods that they pick up from their subscribers homes.

The couple is excited to have this opportunity of urban farming that they are able to keep very local and to show it “as an example that it works in a city,” said Grollmes-Kiefer. “It’s a valid career choice that works for a community. It doesn’t have to sacrifice other things, it’s just beneficial to the community.”

After nine months, Perennial City has been able to accomplish its launch and reach across the St. Louis area into many different neighborhoods. The next goal on the Kiefer’s minds is to get in deeper into the neighborhoods where they already have subscribers.

“We add new neighborhoods based on demands and seeing where listings are wanted,” said Grollmes-Kiefer.

Perennial City reaches neighborhoods by current subscribers being excited about finding a solution for their compost. They also have an instagram page and their door-hangers that help get the word out to neighborhoods.

“We don’t have a specific demographic,” said Grollmes-Kiefer. “We have a very diverse group of subscribers and having them excited about the service is what brings us new sign-ups.”

They are currently doing prep work to have a commercial garden by next year that will be available initially to their subscribers. The idea is that when subscribers choose to have pick-up services, they will also be able to choose whether or not they would like different goods from the garden.

“We already have chickens laying eggs,” said Grollmes-Kiefer. “Being in an urban area, we don’t have as much space as a rural farm to plant goods that need to stay in the ground for longer periods. We want to plant goods that have a quick turnover.”

One of the things that Grollmes-Kiefer loves about the business is doing the pick-ups, saying that she gets to drive around parts of St. Louis that she wouldn’t normally get the chance to do and eat at different, new places.

“Tim and I both love St. Louis,” said Grollmes-Kiefer. “Everyone here knows that it’s a cool city with many amazing opportunities, especially in this day and age. Our subscribers are nice and awesome and leave little notes in their buckets for pick-up.”

Grollmes-Kiefer said that there is so much support from the community, which brings a lot of reassurance to her and her husband when they feel like they are going crazy tackling on the work necessary to help build Perennial City.

They are doing a “give back” this fall to their subscribers. Gollmes-Kiefer said that it is a six-month process of picking up food traps from households and turning it into compost. This fall, their subscribers will be getting the compost back to use in their gardens or for plants in their homes.