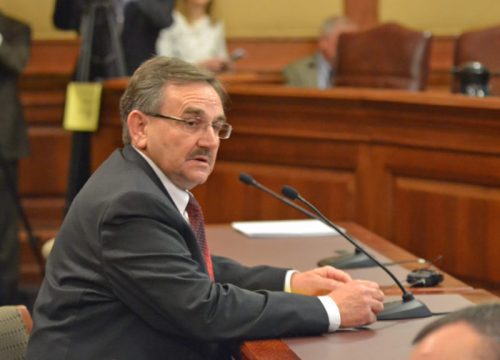 SJR is a legislative vehicle (vs initiative petition) — must be passed by both chambers in identical form. Unlike a regular SB, an SJR goes to vote of people, not for to governor for their signature.

“Over the past 40 years, the Federal Government and several states have repeatedly taken steps to deregulate and allow competition in many service industries…it has worked,” Libla said. “For example, by deregulating trains, trucking, airlines, telecommunications, and the internet, prices have dropped and we have experienced tremendous innovation and ever-increasing reliability with more customer choice.”

This constitutional amendment must be approved or rejected by voters during the November 2020 general election.

The General Assembly must first pass the legislation to ensure protections are established to customers.

“…that entitle customers to safe, reliable, and competitively priced electricity, including, but not limited to provisions that reduce costs to customers, protects against service disconnections and unfair practices, and prohibit the grant of monopolies and exclusive franchises for the generation of electricity,” the bill reads.

“SJR 25 would give our citizens the opportunity to vote for innovative competition in electric service,” Libla said. “This resolution will not apply to member-owned electric co-ops or municipal electric providers.”

The bill also states that nothing “invalidates” the state’s public policies on renewable energy, energy efficiency, and environmental protection. In addition, the General Assembly’s ability to impose the policies on competitive retail electric energy market participants cannot be limited.

A hearing for SJR 25 is scheduled for Thursday in the Senate Transportation, Infrastructure, and Public Safety Committee. Libla is the chairperson of the committee, which could be why the bill was heard there instead of the Senate Commerce and Energy Committee.

Libla says that over 20 different states offer a similar electric competition and have experience positive results.

“Instead of being held hostage by an investor owned monopoly electric provider, Missourians would instead be allowed to choose their electric provider,” he said. “SJR 25 would clear a path for competitors entering the market with more efficient and cheaper ways to generate electricity.”

However, Trey Davis, executive director of Missouri Energy Development Association (MEDA), said that proponents of SJR 25 appear to be ignoring the negative impact of the measure on residential customers in Missouri. He says Massachusetts and Nevada are the most recent states to feel the downfall of deregulation.

“This legislation would place all of the electric generation needs for Missouri in the hands of energy marketers, many of whom are not even based in Missouri,” Davis said. “Do we really want out-of-state energy marketers controlling access to such a vital utility service for our quality of life and economic vitality?”

According to Davis, electric deregulation would also transfer authority over multiple aspects of the generation and delivery of electricity to customers from state oversight to federal oversight, specifically Federal Energy Regulatory Commission (FERC).

“SJR 25 represents popular thinking in the 1990s that actual experience has shown to be harmful to customers,” Davis said. “Missourians enjoy electric rates well below national averages and reliability that is favorable compared to many other regions in the country. States that deregulated their electric utilities years ago have not realized the savings that were promised and in fact pay higher average electric rates than the states that did not deregulate.”