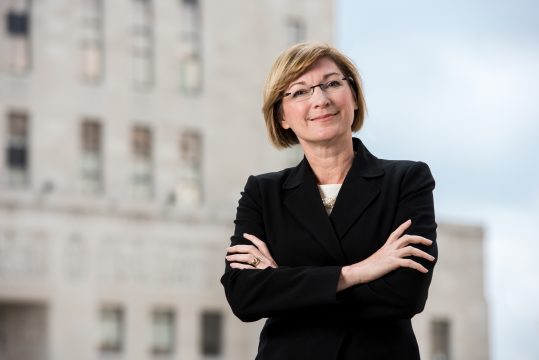 JEFFERSON CITY, Mo. — Jean Peters Baker, Jackson County prosecutor and former state representative, has been chosen to lead the Missouri Democratic Party for the next term.

Following Stephen Webber as chair, Baker announced her candidacy for the role in late November.

“As political cycles seem to shorten, the party needs to quickly begin the work of designing strategies and recruiting candidates up and down the ballot for 2020,” Baker wrote in her announcement. “I will bring my political experience (twice elected Prosecutor and former State Representative), fundraising capability and proven leadership to this race for Chair.

“I am a Missourian, born and raised in rural Osage County before attending Columbia College as an undergraduate, Mizzou for a Master’s in Public Administration and Missouri-Kansas City for law school. I was hired by Claire McCaskill in the Jackson County Prosecutor’s office, but served for over twenty years in that office. In 2010, I was elected to the Missouri House of Representatives serving with distinction before being appointed County Prosecutor to fill an unexpired term.

“I’m known as a fair but progressive leader both as an attorney and as a Democrat. Serving as State Party Chair will be a strong step toward advancing the Democratic platform and building the resources needed to compete in all corners of Missouri. I have deep ties to rural communities, proven urban leadership, the willingness to find consensus and the strength to do what will be necessary to get Democrats winning elections again. It can be done.”

Baker has been a rising star in the Democratic Party over the last decade, proving herself as a public servant with a winning record.