Gov. Greitens: Troopers on city interstates getting dangerous criminals off the streets

It was just over a month ago when Gov. Eric Greitens announced an initiative to put 30 Missouri Highway Patrol troopers on interstates 64, 44, and 55 where they run through St. Louis City, an effort aimed at helping an over-burdened city police force get a handle on violent crime. 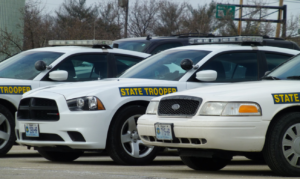 These are interstates where rolling gunfire has resulted in fatal shootings and crashes earlier this year, and in the first week of the collaborative enforcement program, Troop C reported 1,300 law enforcement contacts. Of those, there were 450 warnings handed out, and another 700 charges issued including traffic tickets, felonies, and DUI arrests.

“We’ve been very encouraged by the initial results that we’re seeing,” Eric Greitens said this week. “Very encouraged. We’ve had a Missouri State Highway Patrol Officers who are first of all, building really good relationships with members of the public.”

Greitens said he joined troopers at the start of the program to see first-hand how state law enforcement can make a difference here. 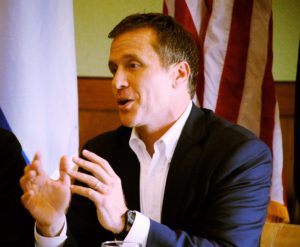 “I was out the very first night doing a ride along and the state director of Public Safety was down on one knee changing a motorist’s tire, and we’re letting people know we’re going to the front lines, working with people and willing to help them,” he told the Clayton Times. “We’ve seen stops for driving under the influence, for driving while intoxicated, they’ve seized illegal weapons, they’ve seized illegal drugs, and again this is just the beginning to creating safer streets for everybody, but very encouraged by the initial results that we’re seeing.”

Greitens says the cooperation between state and local government has thus far been a success, with the Department of Public Safety working very closely with Mayor Lyda Krewson and her public safety team.

“Our chief, Drew Juden, is working very closely with Chief O’Toole, who’s also now working with the federal government,” he said. “We’re working with the DEA and the FBI and their Mission Save Task Force, and we’re getting some of the most violent felons off of the street.”

Two of the 28 arrests likely fit the profile of dangerous felons Greitens refers to.

Marvin Dunn, 25, of St. Louis was charged with possession of a stolen firearm, and failure to appear for previous charges in St. Ann and Normandy.

3,595 thoughts on “Gov. Greitens: Troopers on city interstates getting dangerous criminals off the streets”