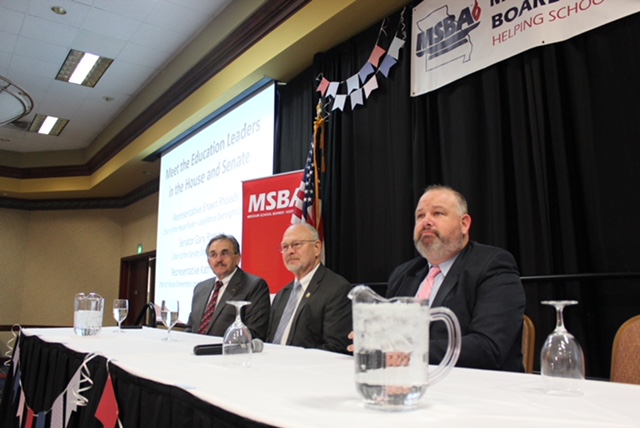 JEFFERSON CITY, Mo. — More than 300 members headed to the Capital City on Tuesday for the Missouri School Board Association’s legislative day.

The organization gathered to discuss their legislative agenda, talking about the ins and outs of education in the Show-Me State with education leaders in the House and Senate.

“We’re concerned about some initiatives that are pending, whether it’s ESAs or charter schools,” Melissa Randol of the MSBA said. “Our interests are simply to advocate for children. And our members do it all for no pay, and they’re concerned about systems that could be created without accountability in our state. But we are not opposed at all to private schools, we embrace the fact that the choice is out there for parents. We just think that if you’re going to use taxpayer dollars, you need to have the same accountability for all.”

Attendees heard from Sens. Gary Romine and Doug Libla, who discussed some of their legislation affecting schools and education, as well as Rep. Shawn Rhoads.

Romine re-affirmed his commitment to filibuster the appointees by Gov. Eric Greitens to the State Board of Education, receiving applause for his comment that they do not deserve to serve. But as the Senate Education committee chair, he also spoke about the work of board members and the legislators. Libla spoke about his education bill requiring students to pass a computer science course to graduate, and Rep. Rhoads addressed the issues of charter schools, telling the audience that all schools should be graded on the same curve.

“We all should play by the same rules first,” he said to the applause of the room.

Rhoads also spoke about his bill, HB 2200, which looks to provide opportunities to highlight innovation by applying to become a “school of innovation” and look to pull back on regulations that may cause obstacles.

Rhoads enjoyed the conversation, having the experience of both a school board member and a legislator.

“School boards are the largest elected body in the state,” Rhoads said afterward. “They’re a voice of the people and could have influence up. They’re a little under-utilized at times, but they are elected officials with concerns, and they do a noble job with no pay. I appreciate their hard work.”

In addition to that, those in attendance received a presentation from a member of the Arizona School Boards Association on Education Savings Accounts (ESA). The Show-Me State does not currently have a law creating ESAs, but has been presented for the past few sessions.

SB 612 this year would enact an ESA, basically allowing a taxpayer to make a donation to an educational assistance organization, like a tutor or private school, with the donation goes into a scholarship fund under organization.

But beyond the legislation discussion, the MSBA also brought several groups of students to the Capitol to showcase some of their work in the Capitol rotunda. “They’re obviously very gifted kids,” Rhoads said with a smile. “It’s pretty amazing to see what they’re able to do. You want the sky to be the limit for these kids, and it’s pretty cool when you get to see that happen.”

He said it was always amazing to see the work they have put in, and the accomplishments and projects they produced.