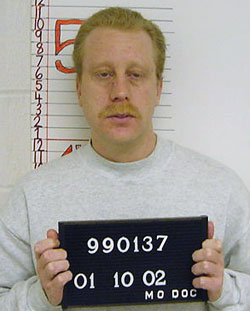 The Supreme Court of Missouri on Tuesday has issued an execution order for a man who murdered his ex-girlfriend’s lover in 1996.

Russell Bucklew, who killed romantic rival, Michael Sanders, after he followed his ex-girlfriend, Stephanie Ray to her and Sanders’ trailer home in Cape Girardeau County.

Bucklew shot Sanders to death in front of his young sons before kidnapping and raping Ray at gunpoint.

In 2014, the United States Supreme Court halted the execution of Bucklew, due to a rare birth defect that would make his execution reportedly torturous.

According to the Supreme Court of Missouri, Bucklew’s appeal of the dismal of his federal civil rights suit was resolved and the stay of execution expired.

In June, the state of Missouri filed a motion to set Bucklew’s execution date and will now be executed during the 24-hour period beginning at 6 p.m. on March 20, 2018.