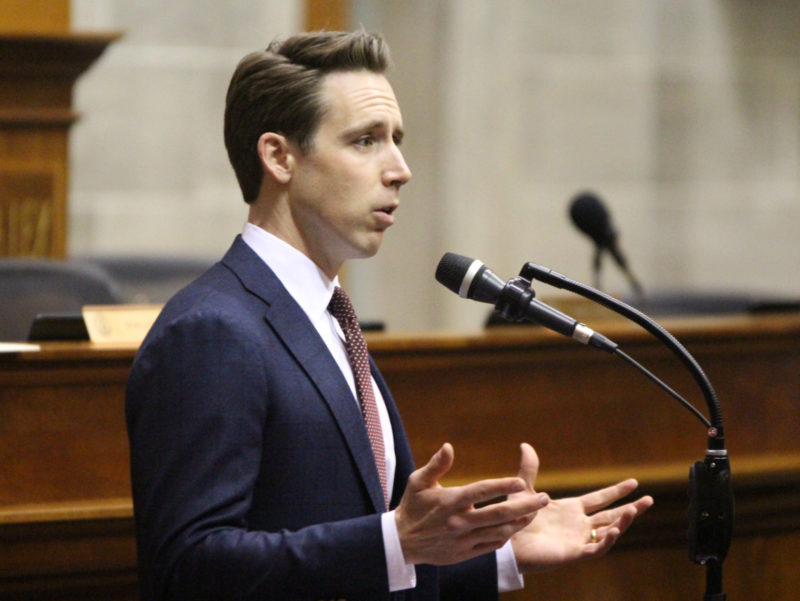 JEFFERSON CITY, Mo. — Missouri’s Attorney General is targeting one of the world’s most valuable companies in the latest investigation by his office.

“In this rapidly evolving tech universe, we need to consider the ways of what we do online is tracked by tech companies, and what happens to that information,” Hawley said. “How do all algorithms influence the news articles that we see? How are advertisements placed into our news feeds? And to what extent are the interests of tech companies placed above that of the consumer?”

Josh Hawley on Monday announced that a subpoena had been issued to Google as part of an investigation into the company’s business practices.

“My office has issued a civil demand to Google. This is an investigative subpoena, it carries the force of law, and compliance with it is not optional,” Hawley said.

The goal of the investigation is to determine whether tech giant has violated the Missouri Merchandising Practices Act – Missouri’s consumer protection statute – and anti-trust laws. “There is strong reason to believe that Google has not been acting in the best interest of Missourians in mind,” Hawley said. “My Office will not stand by and let private consumer information be jeopardized by industry giants, especially to pad their profits.”

The investigation will be looking into Google’s collection, use and disclosure of consumer information and data, as well as if the search engine has manipulated search results to preferred websites owned by the company as well as placing competitors’ sites lower on the list.

According to Forbes, Google had a brand value of nearly $102 billion as of May. It’s estimated that the company has access to 70 percent of all card transactions in the United States. The Google search engine accounts for roughly two-thirds of all Internet searches in the nation.

“No entity in the history of the world has gathered as much information on consumers as Google,” Hawley said. “My office wants to know what Google is doing with this information.”

The Attorney General noted that the company, however, also has a wide range of online services, from Google Shopping, Google Flights, Google Play, etc. Through these services, the company can collect incredible amounts of data on the users, which allows the company to put together highly-detailed profiles on the users for its online advertising business. Some of the data put together can be sold to third parties.

Hawley’s investigation hopes to identify whether the company is properly disclosing the scope of the data collection, as well as how it is used, shared, and secured.

“If it disclosing this information and profiting from it, then consumers need to be informed in a clear and straightforward manner,” he said.

But the scope of the investigation does not end there; instead, it also intends to look into whether Google has misappropriated content and intellectual property from competitors to use on their own sites and products, a practice commonly known as “scraping.”

“This misappropriation hurts business, and it threatens to drive Google’s competitors out of the market, which in turn deprives consumers of innovation and valuable services,” Hawley said.

In 2012, Google agreed not to engage in such conduct, but some competitors are crying foul. In September of this year, Yelp accused the company of scraping content from their pages and using that content on Google Local OneBox.

As for the alleged manipulation of preferred websites, Hawley says that if the claims are true, it “may reflect an unlawful attempt to leverage Google’s near-monopoly power in the market to stifle competition.”

“When using Google’s search engine, consumers expect that the highest ranking result for a search will be the most relevant. However, substantial evidence suggests that Google may manipulate their results to list Google-affiliated sites higher in the results.”

Hawley noted that earlier this year, the European Union’s antitrust agency slammed the company with a nearly $3 billion fine for manipulating search results to favor the Google Shopping platform.

“When a company has access to as much consumer information as Google does, it’s my duty to ensure they are using it appropriately,” Hawley said. “I will not let Missouri consumers and businesses be exploited by industry giants.”

The Missouri Times reached out to Google for a statement Monday morning and received the following from Google spokesperson Patrick Lenihan:

“We have not yet received the subpoena, however, we have strong privacy protections in place for our users and continue to operate in a highly competitive and dynamic environment.”

2,813 thoughts on “Hawley takes aim at Google with latest investigation”